Updated on September 5, 2021 / by Carmen Pirc Leave a Comment

Anxiety disorders are the most common mental disorders in the U.S., affecting over 18% of the U.S. population. Globally, they affect over 7.6% of the entire population.

There are various types of anxiety disorders, including generalized anxiety disorder, social anxiety disorder, post-traumatic stress disorder, obsessive-compulsive disorder, panic disorder, and specific phobias. The symptoms, however, are similar for all of them – regular feelings of tension, worry, fear, irritability, difficulty concentrating, muscle tension, chest tightness, heart palpitations, elevated heart rate, and nervousness. And while all of us experience those emotions from time to time, people diagnosed with an anxiety disorder experience them on a daily basis and to the overbearing extent that they interfere with their lives.

Luckily, anxiety disorders are highly treatable. While a doctor may prescribe you medication to treat the condition, there are also many other natural yet very effective ways to reduce the crippling symptoms that come without any side effects. Some of these strategies include:

As hunger and low blood sugar can promote the feeling of anxiety, one way to calm down is to eat virtually anything, especially something easy to digest, such as a banana. However, in general, it is advised to follow a healthy balanced diet with sufficient amounts of vegetables, fruit, legumes, whole grains, protein, and carbohydrates.

In addition, there are certain foods with brain-boosting properties that may reduce your symptoms of nervousness and anxiety. In this article, we will take a look at exactly that – science-backed calming foods.

This aromatic herb has numerous health benefits, including calming nerves and reducing anxiety. According to several studies, it has amazing anti-inflammatory, antioxidant, antibacterial, and relaxing properties, which have been shown to decrease anxiety-related inflammation.

It also seems to regulate serotonin, gamma-aminobutyric acid (GABA), dopamine, and other mood-related neurotransmitters, as well as the hypothalamic-pituitary-adrenocortical (HPA) axis, which helps control reactions to stress.

A 38-week study with people who suffer from generalized anxiety disorder has shown a significant reduction of symptoms in patients who were consuming 1,500 milligrams of chamomile extract. A similar study has shown decreased symptoms of both anxiety and depression.

While the results of these studies are certainly promising, more studies have to be made on chamomile tea, which is the most common way of chamomile consumption.

Dark chocolate, which contains 70% or more cocoa is known to contain large amounts of certain flavonols, which act as antioxidants in the body. Flavonols, such as catechin and epicatechin, support brain function and protect brain cells. According to some studies, flavonols promote blood flow to the brain and may enhance cell-signaling pathways, which may result in increased stress resilience and thus fewer anxiety attacks. It is also rich in tryptophan, which is converted into serotonin and other positive neurotransmitters. In addition, dark chocolate contains significant amounts of magnesium, which has been shown to reduce depression.

As anxiety is a mood disorder, the delicious and comforting taste and aroma of dark chocolate may also be a contributing factor in calming anxiety, according to a study.

A large study of 13,626 participants found that people who consume dark chocolate on a regular basis have considerably reduced symptoms of depression than the ones who consume it infrequently.

Another 2012 study has shown that frequent dark chocolate consumers have lower levels of anxiety – both immediately after the intake and every after two weeks.

Obviously, these findings would make any dark chocolate lover very pleased, however, as dark chocolate is high in calories, it is best to consume it in moderation (a 1.0-ounce serving at a time).

It is recommended to consume no more than 400 micrograms of selenium per day. Exceeding the daily recommended intake may cause side effects, as such, make sure to only eat three to four Brazil nuts a day.

In addition, brazil nuts, as well as other nuts are rich in vitamin E – a powerful antioxidant effective in treating anxiety and according to a 2015 study, even depression.

Almonds, on the other hand, support brain health with high amounts of vitamin E and healthy fats.

Salmon and Other Fatty Fish

Salmon and other fatty fish, such as sardines, mackerel, herring, and trout are rich in omega-3 fatty acids, especially eicosapentaenoic acid (EPA) and docosahexaenoic acid (DHA), as well as vitamin D. These nutrients have been shown to promote brain health and regulate dopamine and serotonin – the two neurotransmitters that have powerful calming properties.

According to studies, a diet high in fatty acids, especially EPA and DHA, may reduce inflammation and prevent brain cell dysfunction, which is common in people struggling with anxiety. It may also boost your ability to adapt to changes and hangle stress and anxiety triggers.

However, a recent study has shown that people who eat inadequate amounts of omega-3, yet too much omega-6, may be more at risk of developing anxiety or another similar mood disorder. As such, it is important to monitor your omega-3 and omega-6 intake ratio. Currently, it is recommended to have at least two servings of fatty fish a week. A study has shown that eating salmon three times a week reduces self-reported anxiety symptoms, such as heart rate and variability.

Vitamin D deficiency, on the other hand, is linked to a variety of mood disorders, including anxiety and depression. In fact, a 2020 study has shown that vitamin D supplementation is associated with reduced rates of mood disorders.

Turmeric is a renowned South-East Asian spice known for its amazing healing properties. It contains curcumin, which, according to numerous studies, is incredibly effective in promoting brain health and preventing anxiety disorders. With its powerful anti-inflammatory and antioxidant properties, it may help prevent brain-cell damage associated with oxidative stress and chronic inflammation.

A 2014 animal study has shown that curcumin may boost the conversion of an omega-3, called alpha-linolenic acid (ALA) to DHA, which is beneficial to the brain.

A recent randomized study with 80 diabetes patients has shown that taking a supplement with 80 milligrams of nano-curcumin a day for 8 weeks lowered the patients’ anxiety scores significantly. Another 2014 study observed similar effects in patients suffering from depression.

Most researchers have studied the effects of curcumin supplementation instead of curcumin from turmeric, however, adding turmeric into your diet is definitely worth a try. You can add it to smoothies, curries, and other dishes. To increase the absorption of curcumin, add black pepper and olive or coconut oil.

In addition, green tea contains another antioxidant related to increased brain health, called epigallocatechin gallate (EGCG). According to a study, this antioxidant may increase GABA in the brain and reduce anxiety symptoms.

As L-theanine, EGCG, and other beneficial compounds in green tea seem to be most effective when consumed together, experts recommend drinking several cups of green tea a day to reduce psychological distress.

Some types of yogurt contain healthy bacteria called probiotics, including Lactobacillus and Bifidobacteria. According to studies, these bacteria have positive effects on brain health and overall well-being.

Studies show that healthy gut bacteria are linked to better mental health. In addition, anxiety, stress, and depression seem to be related to chronic inflammation, and yogurt with live active cultures may also have anti-inflammatory effects.

A 2016 study found that probiotic yogurt and other fermented foods, such as sauerkraut, kimchi, cheese, and fermented soy may reduce anxiety symptoms and increase happiness levels.

Eggs, especially egg yolks are rich in vitamin D, which has also been shown to have a positive impact on mental health.

Eggs are also packed with protein that contain all the essential amino acids needed for optimal growth and development.

In addition, they contain an amino acid called tryptophan, which helps create serotonin – a neurotransmitter that regulates mood, behavior, and other vital processes and is shown to support brain health and decrease anxiety.

Other great sources of protein include:

Other great sources of the amino acid tryptophan include:

Pumpkin seeds are rich in potassium – a mineral that helps regulate electrolyte balance and blood pressure. Potassium-rich foods, such as pumpkin seeds and bananas may help reduce symptoms of stress and anxiety.

Moreover, pumpkin seeds contain large amounts of zinc. A study has shown that zinc deficiency may have a negative impact on your mood. Zinc is also vital for brain and nerve development and may have an impact on emotions.

Chia seeds, on the other hand, are a great source of omega-3 fatty acids, which support brain health and reduce anxiety symptoms.

Not only are oats an excellent source of protein and the amino acid tryptophan, which supports the production of serotonin – a mood-lifting brain chemical, but it also contains complex carbohydrates, which gradually enter the system and provide a steady energy flow.

Oats seem to be great calming food, however, further research is needed to support the promising claim.

Berries contain lots of antioxidants, which are known to protect cells against stress and may help ease feelings of depression. Antioxidants may also reduce inflammation and thus ease anxiety symptoms.

Blueberries, in particular, are high in vitamin C, flavonoids, and other antioxidants, which may support brain health and provide anxiety relief.

Other great sources of antioxidants include:

Spinach And Other Leafy Greens

As we have already mentioned, spinach and other leafy greens are packed with cell-protecting and brain health-boosting antioxidants.

Moreover, leafy greens, such as kale, collard greens, Swiss chard, and spinach, are high in magnesium – a mineral, which may reduce anxiety symptoms, and make you feel calmer.

Other great sources of magnesium include: 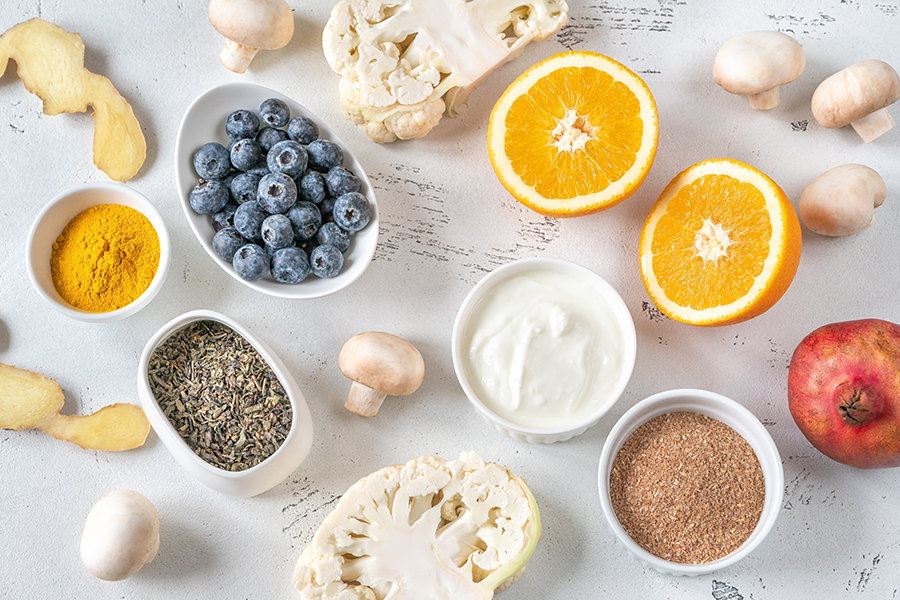 12 Foods High in Polyphenols and Antioxidants 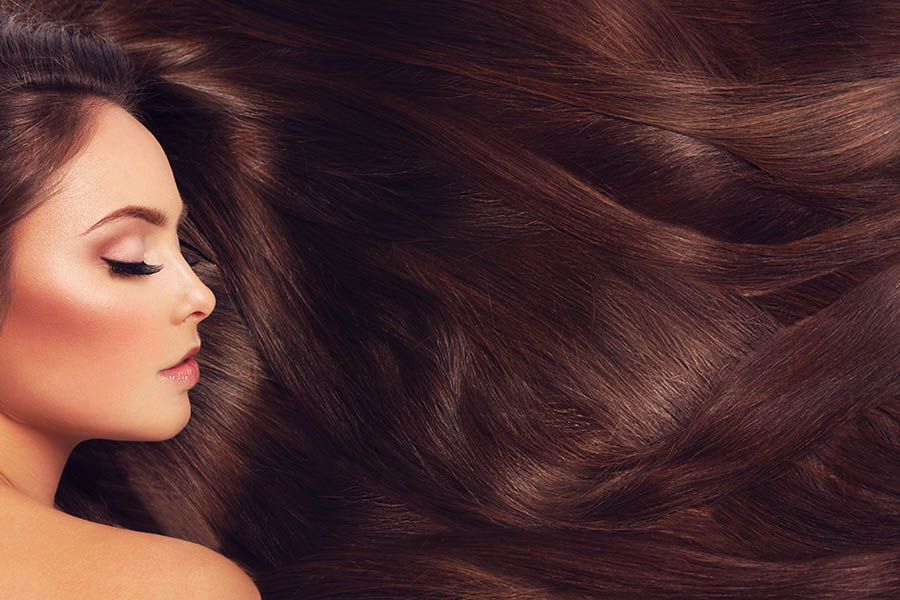 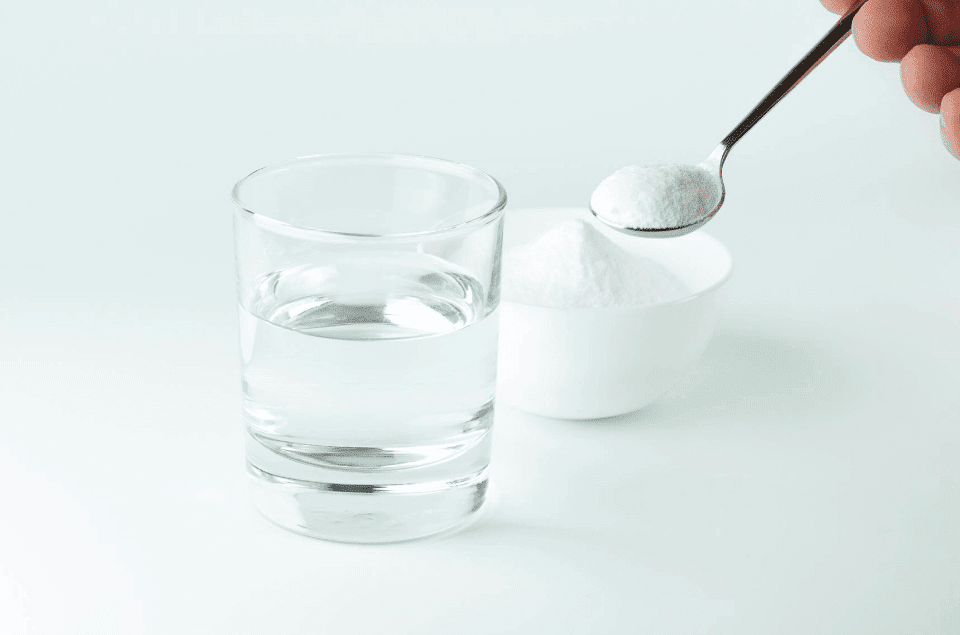